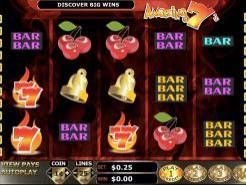 Play Now
Any player who automatically thinks that this is a basic slots game will be forgiven but not forgotten. This game is far from standard and it is not a classic slots by any means. There are five reels and twenty five paylines to this game where players may place single coin bets, two coin bets and three coin bets on single paylines or multiple paylines. The coin sizes offered to the player vary from $0.01 up to $5 per spin and for players who like to sit and watch the spinning reels there is also an auto play function allowing the players to preset the number of spins that the game runs for consecutively.