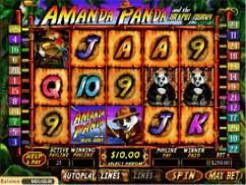 Play Now
Cuddly white and black animals are the way pandas are described by most people but after playing this five reel slots game that has twenty five paylines the player may change his mind a little and realize that the panda is an intelligent animal that has a lot going for him or in this case her. Set in the jungle where Amanda Panda performs for visitors there is a special random bonus game together with a wild substitute and a scatter that offers multiplying payouts. Players also receive free spins with three and more of the scatters. This game like the panda has a lot more to it than players first realize.

The secret chamber bonus round is activated totally at random at the end of any winning spin. Players are taken to a new screen where they are presented with 15 different chambers. The player must then choose one of the chambers that will reveal a prize of either coins, special prizes or a stop button. When the player has accumulated three stop chambers the game ends and he is awarded half of what he had earned in the chamber. The player may quit the secret chamber round of his own choice at any time if he feels he has won enough. Amanda Panda slots is fun and cute at the same time and also gives the player so much in benefits and bonuses that it is a perfect slots game to play.
Play Now